Home » Blog » A big loss for desperate Frank Fina, but no e-mails in sight
Tweet

A big loss for desperate Frank Fina, but no e-mails in sight 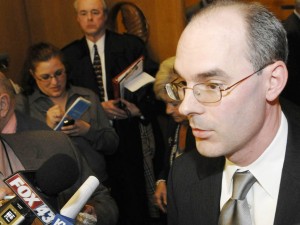 On Friday, a grand jury judge denied his request to keep hundreds of sexually explicit e-mails from four newspapers who sought the records under the Right-to-Know Law.

Now the decision about whether to release the e-mails resides with Attorney General Kathleen Kane, Fina’s arch nemesis.

Fina, a former prosecutor with the Attorney General’s office, is rumored to have been the recipient of some of the e-mails. So it’s understandable that he’d do pretty much anything to keep Kane from releasing those e-mails.

But asking a grand jury judge to prohibit the release of public records that had nothing to do with a grand jury investigation was truly a “Hail Mary.” Fina, it seems, was desperate to keep the e-mails under wraps.

Until Fina butted in late last month, it appeared that Kane was getting ready to release some, if not all, of the e-mails. The Pittsburgh Tribune-Review made its request on July 7, and under the RTKL, Kane’s office was supposed grant or deny the request by August 13. Normally, her RTKL office denies every large request simply because it simply doesn’t feel like dealing with it. This time, however, it didn’t, which signals that it was at least thinking about disclosing the e-mails.

But Kane’s decision just got more complicated after grand jury Judge Norman A. Krumenacker III weighed in. Even though Krumenacker decided he didn’t have the authority to rule on Right-to-Know Law requests, he concluded that the records aren’t subject to the RTKL anyway and urged Kane to keep the records secret.

Sadly, Krumenacker’s legal analysis was 100% incorrect. Under the RTKL, only records that relate to official government business are subject to the RTKL. Therefore, jokes e-mailed between employees don’t have to be disclosed to the public, even if they were sent using agency e-mail addresses on agency computers while an employee was on the clock.

And that’s exactly what Krumenacker said in his opinion. Citing Meguerian v. Office of Attorney General, the judge determined that the e-mails had nothing to do with official agency business, and therefore, they weren’t subject to the RTKL anyway. He urged the parties to review that case before proceeding further – a thinly veiled instruction to Kane’s office to deny access to the e-mails.

But Meguerian’s foundation was built on Bagwell v. Dept. of Education.  If Krumenacker had read Bagwell instead of quoting the part cited by Meguerian, he’d understand that records received in the course official agency business are subject to the RTKL – even if they didn’t originally relate to official business.

That’s because in Bagwell, the Commonwealth Court ruled that records received by the Secretary of Education in his capacity as a Penn State trustee document a “transaction or activity” of the Dept. of Education – the secretary’s “governmental function of representing the Commonwealth’s education interests on the Board.” Even though the records pertained to private business, the use of those records in official agency business brought them under the control of the RTKL.

Krumenacker got it wrong. And even though his opinion isn’t binding, Kane will be hard pressed to disobey it. It was completely improper for Krumenacker to discuss an administrative decision that he admitted he had no control over and that hadn’t even been made yet.

So here’s what is likely to happen: Kane will officially deny the RTKL request, citing Krumenacker’s opinion. At least one newspaper will appeal the ruling, but the OAG gets to decide its own appeals, so you can guess how that will turn out. The only option left will be an appeal to Commonwealth Court, ensuring the e-mails don’t see the light of day for another year.

It’s also possible that Kane could release a few tantalizing e-mails, but deny access to the remainder. Fina could also appeal Krumenacker’s ruling to Superior Court, which would delay the release of the e-mails for an additional 6 to 9 months.

Agencies can be liable for financial penalties under the RTKL if their decision wasn’t based on a “reasonable interpretation of the law.” But Krumenacker’s opinion, no matter how erroneous, delivered her a “reasonable” basis for denying the request. Now, there’s simply no reason for Kane to grant the request instead of allowing it to work its way through the courts.

But that’s what Kane wanted anyway. With Fina’s chief defender (Philly DA Seth Williams) eying a challenge to Kane in the April 2016 primary, Kane wouldn’t want the Fina e-mails to come out until campaign season begins, which is almost exactly a year from now.

Of course, even if the e-mails aren’t subject to the RTKL, nothing prevents Kane from releasing the records anyway. But doing so would allow her detractors to spin it as a political move. On the other hand, it might force Fina to resign now and put an end to the manufactured war between her office and Seth Williams that is likely to continue for the next year.

But unless Kane has a change of heart, Fina’s in the clear for now. And thanks to a a judge who has no authority to over RTKL requests, the public won’t have a fair chance to get its hands on the records for a long time.