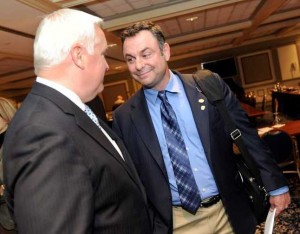 I’m don’t agree with Anthony Lubrano on everything. The trustee-elect’s insistence on making trustees apologize for firing Joe Paterno is misguided. He often talks about greater “transparency” among trustees, but hasn’t proposed specific plans to improve it. And he’s still teaming up with Penn Staters for Responsible Stewardship, whose most vocal members have often made comments that are more militant than responsible.

But I liked what he had to say in today’s Associated Press story, which introduced the three new alumni trustees who will officially take office on Thursday or Friday.

“I have a moral obligation for me to speak out if it’s in the best interest of Penn State for me to do that,” he said. “And I’m certainly not going to be managed by other trustees in my quest for openness and transparency, but I certainly look forward to working with the other trustees to accomplish that objective.”

“I know they all want what’s best for Penn State; I really believe that,” he said, but added, “Penn State was used to doing things a certain way for so long, that maybe they need a guy like me to nudge them a little bit to think outside the box.”

Compare those quotes with those from Taliaferro, who maintained his nice-guy-at-all-costs attitude. After the tired platitudes about his impressive recovery, he said this:

“To accomplish everything, you have to work with people. It’s just can’t be us three with these ideas,” Taliaferro said. “It’s not just ‘Our way or the highway.’ We all have to figure that out. … The right way to approach things.”

“It’s all I expected and much, much more,” he said about life as a trustee. “And there’s still a lot unknowns, and the board still has a lot unknowns.”

Taliaferro and McCombie have fallen in line faster than I imagined they would. When trustees President Karen Peetz told board members not to comment on recently released e-mails from top Penn State administrators, “McCombie and Taliaferro each said they wanted to wait for more information to be released before offering their opinions,” the AP article said.

Lubrano defiantly released his own statement about the emails. Although it lacked substance, at least he didn’t blindly salute his president like his peers.

Anthony Lubrano is the only one who seems to get it. And he just might be our only hope for real change on the Board of Trustees next year.