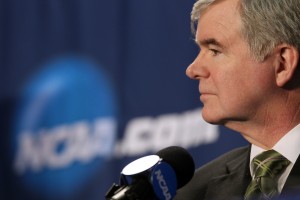 As Penn State began its investigation into the Sandusky scandal, the Big Ten Conference didn’t want to sit on the sidelines and wait for an invitation to jump into the game.

Alongside the NCAA, the conference sought to immerse itself in Penn State’s internal investigation led by Louis J. Freeh, according to a document recently released in response to a Right-to-Know Law request.

“I understand that (Big Ten attorney) John Barrett has been communicating with both the Freeh Group and the NCAA regarding an agreeable process of collaboration on gathering and sharing information,” Delany said. “We expect that the Big Ten will be accorded the same treatment as the NCAA in this collaborative process.”

The letter is consistent with a public statement the conference issued the same day. That statement said the Big Ten wanted its lawyers to “participate” in investigations conducted by the university and the NCAA.

It’s unclear how much access to Freeh’s investigators Penn State granted the two athletic governing bodies. In response to a lawsuit brought by the Paterno family and others, it said the plaintiffs offered no evidence that any contact between the Freeh firm and the NCAA reflected anything other than the execution of a legitimate and proper investigation, which Penn State itself commissioned.” It hasn’t denied that it communicated directly with Freeh.

“The NCAA did not commission the Freeh Report nor had any role in it,” it said in a statement.

But Delaney’s letter suggests the NCAA’s involvement in Penn State’s internal investigation went far beyond simply monitoring its progression from the sidelines.

Paul Kelly, an attorney representing a number of plaintiffs in a lawsuit against the NCAA, recently said the NCAA’s involvement in Freeh’s investigation was substantial.

“We have been informed by knowledgeable sources that there were periodic briefings and exchanges by Freeh’s investigators and the NCAA, and it included instances where the NCAA made certain kind of requests or recommendations as to areas they might want to explore,” Kelly told the Centre Daily Times last month. “There was a certain level of collaboration going on there.”