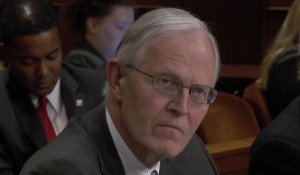 Another Penn State trustee has released his conflict of interest disclosure form after the Erickson administration refused to provide it to him for two months.

Trustee Ryan McCombie became the second board member to provide a copy of his filing. He didn’t keep a copy himself, and was forced to ask for one from Penn State’s administration.

“I did, again, ask for for my conflict of interest statement and the BoT secretaries asked the lawyers for it – as evidently that is where it resides,” he said earlier this week.

The release came on the heels of a legal filing on Monday that indicated the university will release conflict of interest disclosure forms submitted by all of its trustees.

Instead of providing a summary that excludes some information provided by board members, administrators appear poised to give the public a peek at the complete filings handed to the board’s secretary last year.

“In the near future, Penn State intends to make the conflict of interest forms for current members of the Board of Trustees available for inspection upon request,” wrote Associate General Counsel Katherine M. Allen in a footnote of a brief filed with the Office of Open Records.

But it’s unclear if administrators plan to make copies widely available or if they’ll make people look them over in person under the watchful eyes of administrators inside Old Main.

The university’s refusal to release the disclosure forms has drawn ire from some alumni in recent months. Only one trustee has released his filing, and others who didn’t keep a copy have had trouble obtaining one from the administration.

Board bylaws state the disclosures should be filed with the board’s secretary, and must be made public upon request. But administrators have stood behind their decision to release the incomplete summary that was posted online December.