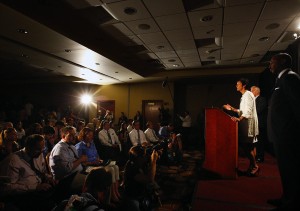 Penn State trustees will allow a handful of citizens to speak at their meetings, but only if it’s about a topic board members allow.

Under changes approved to the board’s bylaws Friday, up to 10 people will be allowed to speak for three minutes each until a 30-minute clock runs out.

But the 10 will be chosen from among those who apply to speak at least two days in advance. Preference will be given to people who want to talk about agenda items, even though the board doesn’t release its agenda until the day of its meeting.

Trustees also prohibited people from speaking about certain topics, such as negotiations with unions, individuals’ employment status,  grievances from individual students and employes and private activities, lifestyles or beliefs of employees and others associated with the university.

Like other Pennsylvania colleges, Penn State is supposed to let people “comment on matters of concern, official action or deliberation which are or may be before the board or council prior to taking official action.” Until now, university officials have refused to allow it.

But the new rules are a thinly veiled attempt by the board to censor public comment while trying to look like it’s becoming more transparent. Instead of welcoming concerns of any type, commenters will be carefully vetted, and may be turned away if trustees disagree with their views.

They won’t let you rail about Joe’s firing. A student sexually harassed by a professor and turned away by administrators can’t tell board members about her ordeal. People can’t complain about a professor who attends off-campus Klu Klux Klan meetings. And unlike pretty much anywhere else in Pennsylvania, union members can’t make their case for benefits they’re trying to negotiate.

The bylaw changes were unanimously approved. Only one trustee – Anthony Lubrano – pointed out that less than 10 people will be allowed to speak because the 30-minute period includes rebuttals by board members. In response, Board President Karen Peetz said she’s willing consider policy changes in the future as needed.

Since Pennsylvania’s Sunshine Act doesn’t give public bodies the right to decide what people will be allowed to speak about, the new bylaws might be illegal.

But lawful or not, trustees aren’t making it easy to bring public concerns to their meetings.