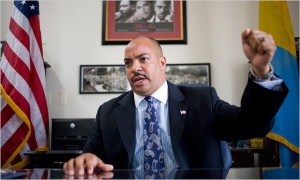 Philadelphia District Attorney Seth Williams’s office spent four months fighting the release of records that it says it doesn’t even have.

Now we get to find out why.

In July, I asked his office for e-mails and other documents sent to Sandusky prosecutor Frank Fina from former supervising grand jury judge Barry Feudale and a bunch of Freeh investigators. The response was typical: the records weren’t subject to disclosure because they didn’t document activities of the Philly DA.

I appealed to the Office of Open Records, which asked Williams’s office to provide a list of the withheld records. It refused, and at the last possible moment decided to declare that it didn’t even have the records that I asked for.

Normally you don’t win points by throwing the bird in the decision maker’s face. But that’s exactly what Assistant District Attorney Brad Bender did when he refused to do what the OOR asked of him.

Bender lost his case. But he didn’t stop there. The whiney ADA tried to get the OOR to change its mind. But like it does with most requests for reconsideration, the OOR told Bender to take a hike.

It was strange that Bender waited until after he lost to make his strongest argument. So I e-mailed him after the ruling, and asked why he didn’t say the DA’s office didn’t have any records in the first place.

His response will amaze you:

I realize that, in your zealous attack against the prosecution and conviction of a serial pedophile, you find facts and evidence inconvenient. But before you accuse someone of lying – especially someone who takes his role as an officer of the court and of the law very seriously – you best have performed some very basic reading comprehension first.

This isn’t the first time an agency has attacked the requester in response to a public records request. But Bender’s statement says a lot more. It demonstrates a willingness to lie about the existence of the records I requested.

The deadline for the DA to hand over the records has passed. His opportunity to appeal the OOR’s ruling to the Commonwealth Court is gone. The order is final.

Since the order is final, I now have the opportunity to file an enforcement action against the DA’s office. This kind of proceeding will allow use to leverage a very useful tool called discovery to help us figure out why the DA’s office is playing games.

Did it look for the requested records when it received my request like the law requires it to do? If so, why didn’t the DA’s office say it didn’t have any records up front? If it originally had the records, where did they run off to? And if they don’t have any of the requested records, how do you explain this Philadelphia Inquirer story that mentioned a number of e-mails Feudale sent to Fina?

Would anybody mind if Frank Fina was deposed? What about Barry Feudale? What might Louis Freeh and the other investigators named in my request have to say?

It’s always sad when law enforcement officials refuse to follow the law. In this case, it’s equally disappointing that Williams is a Penn State alum. But somebody has to hold them accountable.

I can’t do it without your help. Please contribute to the Penn State Sunshine Fund and help send the message that Penn Staters won’t allow the most powerful to trample on our right to know what they’re up to.