Home » Blog » Did a judge impose a gag order on the Sandusky grand jury?
Tweet

Did a judge impose a gag order on the Sandusky grand jury? 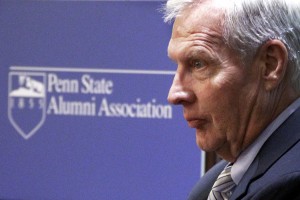 Penn State President Rodney Erickson has granted a number of interviews in recent weeks as media outlets across the country began marking the one-year anniversary of the Jerry Sandusky scandal. One story, published on Tuesday by Bill Schackner of the Pittsburgh Post-Gazette, particularly raised my eyebrows.

When asked about his grand jury testimony in September, Erickson has this peculiar response:

“The judge gave me specific instructions that I was not to reveal anything about the nature of the testimony other than I had testified if asked.”

Grand jury proceedings are secret, and those involved – prosecutors, jurors, judges and attorneys – cannot reveal what is said inside the grand jury room. But as Penn Staters know by now, witnesses can say anything about their experience.

If there’s any doubt whether Erickson is allowed to reveal what he told the grand jury, consider this statement from the Pennsylvania Attorney General’s Web site:

“The only legitimate means through which grand jury proceedings can be made public is through the persons who are subpoenaed to testify. They, alone, of all the people associated with the grand jury, have the right to disclose their testimony to whomever they choose, if they choose to do so.”

The law clearly permits Erickson to say anything about his testimony to anybody he pleases. But did a judge really tell him otherwise, and strip one of his few rights as a grand jury witness?

Despite what the Attorney General’s Web site says, Pennsylvania allows judges to impose gag orders on witnesses for legitimate reasons that are “shown in a hearing before the supervising judge.” So it’s possible that prosecutors sought such an order sometime in the last year. If that’s true, I’m surprised it hasn’t been reported yet.

But it’s also possible that Erickson needed a reason to dodge questions about the proceedings to shift focus away from the continuing investigation as part of his “moving on” initiative. By blaming the need for  secrecy on a judge, he avoids looking like he’s hiding something.