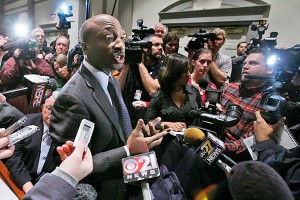 Penn State trustees held a secret “retreat” earlier this year, and had at least casual contact with consultants who were investigating the Sandusky scandal, according recently released state documents.

The idea of a June gathering was talked about during the trustee’s public meeting in May, according to an e-mail from Paula R.  Ammerman, the board’s head staffer. Days later, she e-mailed trustees about scheduling the retreat the day after a black-tie event to honor some alumni.

“In follow-up to discussions of last week, I am writing to determine the availability of the voting members to participate in a retreat planned for Sunday, June 3, at University Park,”  she wrote.

It’s unclear what trustees discussed at the retreat, which wasn’t publicly announced. But it came after trustees were widely criticized for holding a similar retreat in February behind closed doors.

The meeting was mentioned in a trove of documents released under Pennsylvania’s Right to Know Law. Citing exemptions to the law, the Pennsylvania Department of Education withheld an unknown number of documents.

Its decision is being appealed.

The documents revealed trustees held three other secret meetings. One was a so-called “briefing call” on July 1. A notice that was e-mailed to board members the day before didn’t list an agenda or reason for the call.

Another was held at 8 a.m. on the day Louis Freeh released his report about the Sandusky scandal, but board members were told on June 26 the  “special briefing session” would be about Sandusky’s conviction.

A third meeting by the Committee on Academic Affairs and Student Life was held on May 3, according to a memo from Ammerman. It included presentations about a performing arts project and the relationship between academic affairs and student life.

The documents also show that trustee Ken Frazier, who lead the board committee that oversaw its internal review of the scandal, had at least casual contact with Louis Freeh while his team investigated.

In a July 6 email from his corporate e-mail account, Frazier sent notice of an ESPN article to Freeh, his general counsel and Pennsylvania Secretary of Education Ron Tomalis. The article previewed Freeh’s final report on the investigation, which was released six days later.

In another e-mail, Ammerman warned trustees on April 5 they might be contacted by Altoona Mirror reporter Russ O’Reilly after he asked for a copy of the board’s “public mailing list.”

“In the event you are contacted by Mr. O’Reilly, please feel free to direct him to the Office of Public Information at 814-865-7517,” she wrote.

Most documents released were e-mails that contained links to news stories about Penn State. The compilations were sent twice a day  by the university’s Department of Public Information to a private list of recipients on a Penn State mailing list.