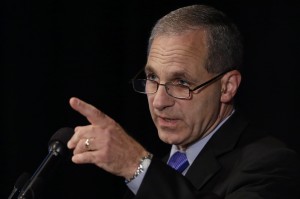 It was billed as an independent investigation that would serve as the definitive narrative on what happened at Penn State.

But a series of internal emails released by the Pennsylvania Attorney General last week suggest investigators for Louis J. Freeh didn’t arrive at their conclusions on their own.

After working with state prosecutors to convict Jerry Sandusky in June, Freeh’s team of ex law-enforcement officials celebrated the victory, the emails show. And within hours of his conviction, they offered their congratulations and expressed their pride.

“I am proud of you and the entire prosecution team,” wrote senior Freeh investigator Gregory Paw to Frank Fina, the AG’s lead prosecutor. “Very well done.”

The emails, released in response to a Right-to-Know Law request on Thursday, call into question the objectivity of an investigative team that Penn State hired to explain how child abuse allegations went unreported for years. They paint a picture of a group of private eyes who were hired to conduct their own, independent investigation, but wound up working with prosecutors to secure a criminal conviction and support their law enforcement objectives.

At the urging of Pennsylvania Governor Tom Corbett, Penn State hired Freeh, Sporkin & Sullivan in November 2011 “to conduct a full, fair and completely independent investigation,” Freeh said when announcing his findings on July 12. “We have shown no favoritism toward any of the parties, including the Board of Trustees itself, our client.”

During the investigation, “we continuously interfaced and cooperated with those agencies and authorities,” Freeh said.

But the emails between his investigators and members of the Attorney General’s office seem to counter the former FBI director’s claim of complete independence. They suggest their interaction with law-enforcement agencies went beyond mere cooperation.

Hours after Sandusky was convicted, Freeh investigator Tom Cloud congratulated prosecutors. “As I told Tony – congrats on a great job in tough conditions,” he wrote to Randy Feathers, the agent who supervised the AG’s Sandusky investigation. “Our team is happy.”

Just before midnight, Feathers replied. “Thanks, [we] were happy too. It was great working with you guys. You all are real pros.”

The next day, Fina replied to Paw, who wrote how proud he was. “Thank you for all the help and support,” Fina said.

And when Freeh delivered his own verdict against Penn State on July 12, Fina was pleased. “Truly great work,” he said in an e-mail to Paw. “Please extend my congratulations to your team.”

Paw replied the same day. “This note really means a lot to me,” he told Fina. “I have a tremendous respect for you and your work, and it was my pleasure to have an opportunity to work with you on this matter.”