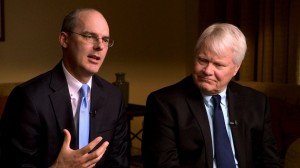 The Pennsylvania Attorney General yesterday refused to release a series of e-mails between state prosecutors and investigators working for Louis J. Freeh.

Hoffa revealed little about the content of the e-mails, which were recently recovered as part of Attorney General Kathleen Kane’s internal review of the Jerry Sandusky investigation. But dates and subject lines offer a glimpse into the cooperative relationship between Penn State’s investigators and  state prosecutors who worked to convict the very people his client was paying to defend.

According to Hoffa’s opinion, Freeh investigators traded e-mails about an “investigative report” less than a month after his investigation began. The exchanges could have referred to the final report of the AG’s Sandusky investigation, a document that officials were prohibited from releasing to non-law enforcement personnel.

And a March 21, 2012 message titled “receipt of e-mails” may refer to a series of 2001 e-mails that Freeh said shows top officials intentionally sought to conceal Sandusky’s crimes.

The other e-mails are:

In her opinion, Hoffa cited five exemptions that allow the AG to withhold the records. But she didn’t state which rules apply to the individual records, a key disclosure that is needed for state agencies to meet their burden of proof. She also didn’t address an unknown number of other records that were also subject to the appeal.

The Attorney General is one of three state agencies that is allowed to decide its own appeals. Some say that leads to a biased decision, unlike appeals involving most state agencies, which are decided by the Office of Open Records.

Hoffa’s decision will become final unless its appealed within 30 days.