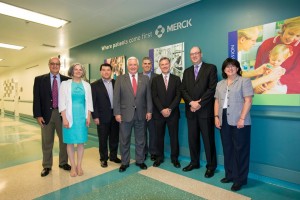 A Penn State trustee asked Gov. Tom Corbett to support his company while he led the university’s investigation into the Sandusky scandal, newly released e-mails show.

The request by Merck CEO Ken Frazier was made during a secret 2012 meeting in Washington, D.C. as the probe by former FBI director Louis J. Freeh entered its fourth month.

“Merck is the Commonwealth’s largest manufacturer,” he wrote to former secretary of education Ron Tomalis, after his Feb. 24, 2012 meeting with Corbett. “I just wanted the Governor to know that we appreciate his support for our business and to invite him to visit our facility in Montgomery County.”

The meeting came as former Pennsylvania Attorney General Linda Kelly continued to negotiate a settlement with Merck over its controversial painkiller Vioxx. Unlike most states, Kelly didn’t agree to a November 2011 settlement agreement involving the federal government and 43 states.

Instead, Kelly, who succeeded Corbett when he became governor, continued the legal battle with Merck.  Though a final settlement was announced by Attorney General Kathleen Kane in February 2013, it was Kelly’s office that filed the $8.25 million settlement agreement six days before her term expired, according to court records.

It’s unclear why Kelly settled the case just days before she left the Attorney General’s office, or if the Corbett administration urged Kelly to take action before the start of Kane’s term.