In sanctions’ wake, three trustees fought, then fell in line 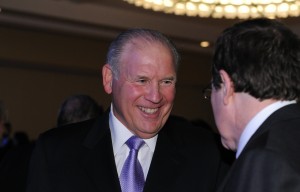 When Rodney Erickson accepted the unprecedented sanctions that were forced by the NCAA last year, it’s well known that Joel Myers criticized what he said was an unauthorized signing of the consent decree.

But behind the scenes, one other trustee also railed against the agreement to fellow board members, and another questioned whether the university president lied.

On July 24, 2012, Ira Lubert, one of the board’s wealthiest and most influential members, fired off an angry email to Erickson after the head of the NCAA’s Executive Committee said it never considered the so-called “death penalty.”

Sent from an iPad the morning after Mark Emmert announced the penalties, Lubert complained that Erickson misrepresented the death penalty threat to the board and said Penn State should challenge Ray on his claims.

“l’m very troubled about this representation in light of your explanation to us yesterday that we had no option but to sign this, no negotiation etc!” Lubert wrote in an e-mail to Erickson and other board members. “Again this board is put in the position that we don’t know what we’re doing and that we rush to decisions under the excuse we ‘had no choice.'”

“Either Ed Ray is misrepresenting what took place between you and the NCAA or myself and perhaps others on the board took away the wrong conclusion from yesterday’s call. I hung the phone up believing WE HAD NO OPTIONS that if we didn’t sign that agreement then and there with no room for negotiation that we would get a multi year death penalty.”

The e-mail was among 86 pages of records released by Gov. Tom Corbett’s office last month in response to a Right-to-Know Law request. His office also withheld 56 other records. The state Office of Open Records is reviewing the documents to determine if they can be released.

His rant was a response an ESPN interview with Ray, who stated “there was never a threat made to anyone about suspension of play if the consent decree was not agreed to.”

Instead, Erickson claimed that the NCAA threatened to suspend Penn State’s football team for four years unless the university accepted the consent decree.

Later that day, former state Secretary of Education Ron Tomalis, who co-chaired the group that oversaw Freeh’s investigation, also questioned Erickson’s credibility. “How consistent is this with what was on the call, since I had to drop off,” Tomalis wrote to Jennifer Branstetter, a trustee and member of Governor Tom Corbett’s staff, as well as trustee Mark Dambly, in an e-mail.

But Myers was the first trustee to call for an end to the consent decree in a memo to board members on night that the sanctions were announced.

Citing the cost, the NCAA’s unusual negotiating tactics and an obligation to university students, Myers, whose term will expire next year, said the agreement was a mistake and called on board members to reject its implementation.

“lf the NCAA is not willing to act in a fair and reasoned way, then we need to consider securing the best legal and skilled negotiating talent to stand up for those who count on us to be their voices  – the students and alumni, the community and the state,” he wrote.

On August 10, 2012, he released a different version of his complaints to the public.

During a public board conference call on August 12, 2012, after the sanctions were announced,  neither Tomalis nor Lubert challenged the consent decree or Erickson’s description of the negotiations. Lubert and Myers threw their support behind Erickson, and all three said the board needs to move on.

It’s unclear why Lubert changed his mind. He didn’t respond to an e-mail seeking why he stopped challenging Erickson’s description of the negotiations.

At the beginning of this year, Lubert and Myers were both appointed to the board’s powerful executive committee.