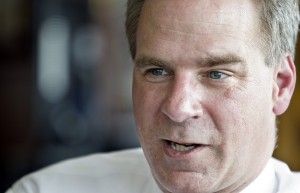 Today I filed a lawsuit against the Pennsylvania Office of Open Records, challenging its decision to allow state officials to withhold public documents about Penn State.

My suit stems from an information request in June, which sought emails and other documents received by Secretary of Education Ron Tomalis in his capacity as Penn State trustee. The department released some records, but withheld an unknown number of other documents.

The OOR eventually rulled that all records of the secretary’s Penn State activities are off limits to the public, because they don’t reveal the activities of a state agency.

This couldn’t be further from the truth. The state legislature put Tomalis on the Penn State board. State taxpayers paid for him to be there. But even though he represented the Commonwealth of Pennsylvania before the Board of Trustees, the OOR decided that he doesn’t have to tell a soul about what he did.

It’s unclear why the OOR sided with secrecy. Its opinion in both cases was far too conclusory for anyone to understand the logic that led to its decision. It also conflicts with its own precedent, as well as rulings by the Pennsylvania Commonwealth Court.

This wasn’t the first time the OOR said a state official doesn’t have to release documents about his trustee activities. A similar request to Governor Tom Corbett from the Pittsburgh Post-Gazette was also denied by the OOR in April. Its ruling means four of the state’s top officials – the governor, secretary of education, secretary of agriculture, and secretary of conservation and natural resources – can keep their trustee activities secret.

I seek not only to find out about the role public officials played in the decisions that impacted Penn State over the last year, but also to preserve the ability of citizens to learn more about their public officials. Transparency at all levels is something I cherish, and I won’t hesitate to challenge those who choose secrecy over openness.