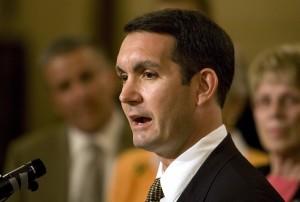 In the wake of the Sandusky scandal, state Rep. Eugene DePasquale wanted to pry open Penn State’s doors and make its records open to the public. But even with the unprecedented exposure of the university’s secrecy, the York Democrat’s bill never made it out of committee

When legislators return to Harrisburg in the fall, DePasquale will give it another shot, the Pennsylvania Independent reported yesterday.

“This is the no-brainer of no-brainers,” DePasquale said. “We are finding more and more evidence as to why it’s necessary.”

When I ran for Penn State trustee, I proposed an alternative to DePasquale’s plan that would have adopted most of Pennsylvania’s Right to Know Law as a Board of Trustees policy. With such a tiny portion of the univeristy’s revenues coming from state tax dollars, I had a hard time arguing that Penn State should follow the same rules as a local school board or city council. I also wanted Penn State to take matters into its own hands and send a message to the world that we could change our tired ways.

That, unfortunately, was a pipe dream. In the nine months since the Sandusky scandal broke, Penn State’s trustees have shown no interest in making university records available to the public. Conversely, they concealed discussions about reorganizing their committee structure, in clear violation of the state’s open meetings law. Board president Karen Peetz holds a secret weekly conference call with the executive committee, also in violation of the law. And when trustee Keith Masser spoke freely about what top administrators knew about the 2001 allegation against Sandusky, he was shouted down and made to apologize to his fellow board members.

Faced with an onslaught of cries for transparency, trustees have doubled down on their secrecy. And I’m convinced that the only way to bring some kind of transparency to Happy Valley is to impose it on a group of people who continue to oppose what so many demand.

When DePasquale tries again, he’ll have my support. And I hope he gets somewhere this time.