Home » Blog » One trustee discloses his disclosure form; most others refuse
Tweet

One trustee discloses his disclosure form; most others refuse 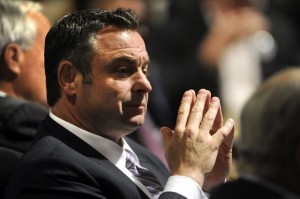 Recall that in December, when I asked for copies of trustee conflict of interest disclosure forms, the administration refused to hand them over. Instead, it stood by its decision to provide a tidy, sanitized summary, despite the fact that board bylaws say they must be released.

So I resorted to an old reporter’s tactic to get the information I sought. Since official Penn State wouldn’t do what it should, I asked each of the 32 trustees to provide a copy on their own.

The response was disappointing, but not surprising. Of the four board members who responded to my requests, only one – trustee Anthony Lubrano – decided to provide a copy of his form.

Peter Khoury, a Corbett appointee who’s also a Penn State student, was the first to respond. He said he didn’t keep a copy of his form, but pointed me to the official summary posted online. When I asked him to tell the board secretary to provide a copy of the form on his behalf, he didn’t respond.

Ryan McCombie, an alumni-elected trustee, also responded. He also didn’t have a copy of his form, but asked me to remind him about before the January board meeting and he would try to obtain a copy. In a follow-up email today, he said, “actually I have asked and will ask again (and why I haven’t received it) Monday.”

But it was board Vice Chairman Paul Silvis, a gubernatorial appointee, who  provided the most bizarre response.

“Why should I send my personal conflict of interest statement that I submitted to the University to a total stranger?”

I didn’t know what to say. How do you explain to a college graduate that the purpose of a disclosure form is to disclose stuff?

But I tried my best to persuade him. First, I explained that board bylaws say the disclosure forms must be made available to the public. Since I’m a member of the public, I argued, he should make it available to me.  Next, I reminded him that releasing a copy of his disclosure form would demonstrate his personal commitment to transparency. And finally, I told him that it might not look so good if he, as the board’s vice chairman, was one of the trustees who didn’t release his disclosure form.

Give those three credit for responding, because nobody else even had the courage to say they believe in keeping the disclosure forms secret.

The unwillingness to disclose the disclosure forms  isn’t surprising to alumni. According to the results of an annual alumni survey released last month, only 16 percent of alumni trust the board to provide them with information about Penn State. The university administration didn’t fare much better – only 28 percent of alumni trust it to provide information. Those figures haven’t budged since the survey was first conducted in May 2012.

In the face of such broad distrust, you’d think that Silvis would want to improve that sentiment. But based on the board’s response to my requests, it’s clear trustees lack any interest in regaining the trust of the university community.

There’s simply no hope of improving trust if board members aren’t willing to disclose their disclosures.

This story was updated to reflect the fact that Ryan McCombie asked board staffers for a copy of his form, but had not received it by today.

Ted Brown responded. He said he rarely checks his official Penn State e-mail account, but promised to check it more often. As for his conflict of interest disclosure form: “I will request it from the BOT office tomorrow and post mine,” he said. “A very legitimate request and I apologize for missing it.”