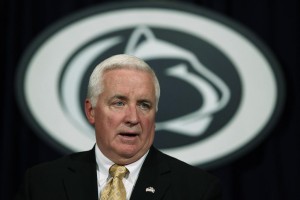 Leaders of the Penn State task force that oversaw the university’s Sandusky investigation chose their investigative firm exclusively from a list compiled by the Corbett administration, according to an e-mail released by the education department.

Despite offers of help from numerous law firms, trustees Ken Frazier and Ron Tomalis only considered three former prosecutors that were hand-picked by Corbett’s Office of General Counsel.

At the top of the list was Michael Chertoff, the former Secretary of Homeland Security who now works for the international law firm Covington & Burling. Louis J. Freeh was the administration’s second choice. The third was Kevin O’Connor, a former U.S. Attorney and top Justice Department official who at the time was working for the firm Bracewell & Guliani.

“After internal deliberations, we find [those] individuals highly qualified to handle the representation,” wrote James Schultz, who at the time was second in command of the General Counsel’s office.

The e-mail to Tomalis raises new questions about the independence of Penn State’s internal investigation into allegations that university administrators ignored allegations of child sexual abuse for more than a decade. It was released by the education department after a 14-month public records battle by Penn State alumnus Ryan Bagwell and the Penn State Sunshine Fund.

While records released last year showed Tomalis and Frazier interviewed Chertoff and Freeh for the job, it wasn’t previously known they relied solely on firms that were pre-approved by the Corbett administration.

As Pennsylvania’s attorney general, Corbett oversaw the Sandusky criminal investigation until he became governor in 2011. When a grand jury recommended charges against Sandusky less than a year into his first term, Corbett discussed the investigative firm’s role with then-attorney general Linda Kelly.

The e-mail’s release came after the Commonwealth Court in April said the OOR should consider allowing Tomalis to be deposed. Instead of facing the prospect of depositions and discovery, the education department decided to release the records if Bagwell agreed to discontinue the case.

The Department of Education had argued the e-mail was subject to the attorney-client privilege and didn’t have to be released. Though Tomalis stated under the penalty of perjury that he didn’t waive the privilege, Bagwell presented evidence that Tomalis shared the e-mail with John Surma and Ken Frazier, which resulted in a waiver of privilege.

“The evidence clearly shows that Ron Tomalis committed perjury by stating he didn’t waive the attorney-client privilege,” Bagwell said. “His lie resulted in an unlawful delay of access to an important public record, and wasted the precious resources of the courts, the Department of Education and the Office of Open Records. Because of his misrepresentation, I am considering all available options, both criminal and civil, to hold one of the state’s highest-ranking public officials accountable for his actions.”