State orders Phila. DA to release correspondence with Freeh, others 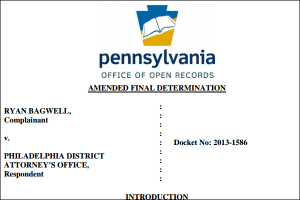 The Pennsylvania Office of Open Records on Monday ordered the Philadelphia District Attorney to turn over correspondence with people involved in the Sandusky investigation.

Email and other documents between  former state prosecutor Frank Fina to former supervising judge of the grand jury Barry Feudale,  Louis Freeh and other members Freeh’s team must be released within 30 days unless the DA decides to appeal.

Assistant District Attorney Brad Bender argued that the records weren’t subject to the Right-to-Know Law because the correspondence didn’t document an activity of the DA’s office. When the OOR asked Bender to provide a list of records it withheld, Bender refused.

In its opinion, Appeals Officer J. Chadwick Schnee ruled that Bender failed prove the the withheld records were exempt from disclosure. An affidavit concerning the content of the records wasn’t good enough, Schnee said.

“Here, the OOR finds that the statements presented by the Office are conclusory and offer no details as to the nature or content of the records requested and fail to demonstrate how such e-mails do not constitute ―records as defined by the RTKL,” Schnee wrote.

Schnee also said that Bender had several opportunities to claim other, more substantive reasons for withholding the records. Instead, he chose an argument that he didn’t successfully defend.

The DA’s office has until December 4th to release the withheld records. or appeal Schnee’s ruling to the Philadelphia Court of Common Pleas.

After losing his case, Bender says his office doesn’t have any records, and wants the OOR to reopen the case.

In a late-afternoon filing with the OOR, the  assistant district attorney claims under the penalty of perjury that somebody in his office did some sort of looking for the records and came up empty handed.

“After conducting a reasonable search, the Philadelphia District Attorney’s Office does not possess any documents that would be responsive to the Right to Know Law request submitted by Ryan Bagwell,” he wrote in an affidavit.

But he didn’t say who conducted the so-called “reasonable search,” what it entailed or specify which records the person couldn’t find.

The OOR provides an example of a form agencies are supposed to use when they can’t find the requested records. Bender’s affidavit doesn’t follow that form and would likely fall short of proving the records do not exist.

The DA’s claim appears to be contrary to a report by the Philadelphia Inquirer in July, which said Feudale corresponded with Fina after he left the Attorney General’s office.

The e-mails reported by the Inquirer were handed over to  H. Geoffrey Moulton Jr., a special prosecutor for the attorney general who is conducting a review into the Sandusky matter.

It’s unlikely that the OOR will grant Bender’s petition for reconsideration. It hasn’t granted one since 2011, according to its web site.