Home » Blog » Steve Garban quietly falls on his sword, and takes an opportunity with him
Tweet

Steve Garban quietly falls on his sword, and takes an opportunity with him 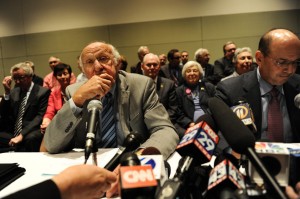 Hey. Did you hear that? Steve Garban, the embattled Penn State trustee, finally resigned tonight. He knew about the Sandusky charges a week before they were announced, but apparently did nothing to stop the train wreck from unfolding.

What? You didn’t hear anything? Oh, right. That’s because his resignation barely made a whisper.

There was no statement of regret that you’d normally read from a board chairman who exhibited such a massive failure of leadership. He accepted no responsibility for his missteps in November that tore the Penn State family apart.

The only notice of his resignation came from a memo from President Karen Peetz that was buried inside the trustees’ web site under “Other Updates” – accessible from a link half-way down the page.

No announcement was made by Penn State’s crack media team. Garban held no press conference  to answer for his actions. And when the Centre Daily Times called him tonight, Garban referred a reporter to Penn State’s official spokesmen, declining to explain why he decided to step down.

A loyal soldier for more than three decades, Garban fell on his sword and quietly slinked off into the darkness.

Peetz thanked Garban for his service, and praised his decision to go. “This selfless leadership exemplifies the culture shift we are working hard to create,” she wrote in her memo. “I will miss Steve and his many contributions to the board, but I understand and respect his reasons for leaving.”

But she stopped short of explaining those reasons. Only Garban’s letter of resignation – which accompanied her memo – was left to explain why he decided to step down nine months after the scandal broke.

It is clear to me that my presence on the Board has become a distraction and an impediment to your efforts to move forward.

I had not planned to run again when my term expires next year, but I now feel it is best for the Board and the University that I submit my resignation from the Penn State Board of Trustees, effective immediately. This is not a decision I have come to lightly. It is a decision that is my own.

As the crisis unfolded in November, his incompetence forced him to hand the reins to Vice President John Surma. But that wasn’t enough to make him resign. Instead, Garban gave up his chairmanship permanently, intending to finish out the last year of his term.

Then the Freeh report was released, and he he got caught. In Steve Garban’s mind, only then was it time to go.

It’s one of the saddest resignations I’ve seen. An opportunity to repent and show some real leadership is gone.

And so is another chance for the Penn State family to have something to be proud of.