Home » Blog » The Patriot-News wants transparency, but not too much
Tweet

The Patriot-News wants transparency, but not too much 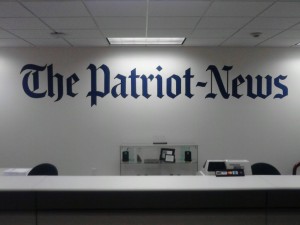 A long time ago I was a newspaper reporter, so I have a soft spot in my heart for hard-working journalists. They do a thankless job under the constant threat of layoffs and are rewarded with terrible pay and little chance for advancement. So you’ll rarely hear me lash out at a newspaper for what I think is bad journalism.

But the Patriot-News yesterday took journalism to a new low with an editorial that urged Penn State to be more transparent – but not too much.

The editorial’s headline was encouraging: “In Penn State election, let’s see more transparency and more moxie.” I agree. We need to elect people with the fortitude to change the way the board shares and uses information. I’ve been saying that for three years now, and have proposed measures to do exactly that.

But the editorial quickly devolved into another “move on” piece that ordered Penn Staters to stop asking questions about how the Sandusky scandal was handled.

Ponder that for a moment: a newspaper, whose sole purpose in society is to ask questions and print answers, advocated for others to stop asking questions.

It’s hypocritical. But not only for the reason you think.  Two weeks ago, when the Pittsburgh Post-Gazette published a piece about a nixed Paterno tribute based on a cache of public records I obtained, two separate people from the Patriot-News begged me to share the records with it as well. I begrudgingly obliged.

But yesterday, the Patriot-News changed its mind. It now believes that nobody should be looking at the same information that it was drooling over just a few days ago. It said this:

But beyond the lesson that a board needs strong, well-informed individual members – which has clearly been learned by this point — there’s little need for today’s Penn State board to wallow in what-ifs about the Sandusky affair.

At the risk of being accused of wallowing in hypotheticals, this morning I called Opinion Page Editor John Micek. He knew nothing about me, nothing about my Right-to-Know Law battles, and nothing about the Penn State Sunshine Fund. I asked him to explain how the newspaper can take a position against asking questions about the Sandusky scandal when it did exactly that just two weeks ago.

He had no idea that his newspaper recently sought the information. There’s a thick separation between the opinion department and the rest of the newsroom, he said, and as a former reporter, I should know that because it’s “journalism 101.”

Newsrooms are supposed to keep their advertising and news operations separate to prevent the profiteers in the organization meddling with the editorial independence. But I’ve never heard of opinion writers being barred from talking with their own reporting staff. How in the world can you expect to write a solid opinion piece if you don’t know the basic facts to base that opinion on? (In my little newsroom in Annapolis, our editorial writer would ask us to read his pieces for accuracy if the editorial was based on a reporter’s news story).

Micek was defensive and condescending. He believes that, for some unknown reason, asking questions about the Sandusky scandal is hurting Penn State, despite every indication to the contrary. I tried to explain to him that he just didn’t have all the facts, but he didn’t want to hear it.

So far, I’ve uncovered nearly 1,500 pages of records that show what happened as Penn State struggled to respond to the Sandusky scandal. I’ve done everything I can to get the news media to ask some of the obvious questions they raise. But I’ve been consistently disappointed at the complete lack of curiosity, even when a story is handed to them on a silver platter.

The only possible explanation for the Patriot-News’s ignorance is that it can’t stomach the idea of poking holes in a story it worked so hard to write. Sarah Ganim was a good newshound, and she deserves a lot of credit, despite what her critics say. But while she never wrote anything inaccurate, it increasingly looks like she got played. For the Patriot-News to take a serious look at the relationship between Frank Fina, Louis Freeh and the trustees’ Special Investigations Task Force would require a complete re-examination of its own reporting. And I don’t think it has the cojones for that.

This editorial truly angered me, not as a Penn Stater, but as someone who believes deeply in the importance of a strong Fourth Estate. American journalism is in decline, and this episode demonstrates the Patriot-News is leading the free fall.