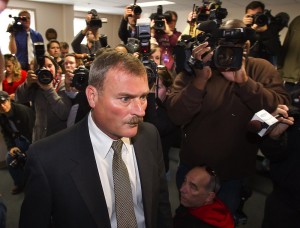 Dauphin County court officials yesterday posted transcripts of this week’s preliminary hearing. In the event you didn’t immediately read the more than 300 pages of testimony, they reveal many details not previously known, including some that poke even more holes into the sieve that’s commonly known as the Freeh report.

The testimony of Kim Belcher, Gary Schultz’s former secretary, was perhaps the most enlightening, because it completely obliterates Freeh’s idea that Gary Schultz kept a secret file about how they handled the Sandusky matters.

During a Q&A session with reporters after he released his report,  Freeh talked about how difficult Schultz’s notes were to obtain:

“It was a question of skill and luck, I don’t discount either. He actively sought to conceal those records. We found them in conjunction with the attorney general. They’re very critical notes, very critical records … it was an active case of trying to conceal evidence, you know. You don’t do that. It’s a dumb thing to do.”

(Thanks to Linda Berkland for the video of Freeh’s comments.)

And in his report, his team offered the following explanation:

After the Commonwealth brought criminal charges against Schultz in November 2011, Schultz’s assistant removed some of the Sandusky files from Schultz’s Penn State office and delivered them to Schultz.  The assistant failed to disclose in two interviews with the Special Investigative Counsel that the Sandusky files had been removed. Only in May 2012 did the existence of these important files come to light so that the documents could be retrieved. Page 69 of the Freeh Report.

Actively sought to conceal. Removed files. There was no question in Freeh’s mind that Schultz took steps to hide evidence from investigators.

However, testimony and court documents tell a different story.

Schultz retired from Penn State in 2009, leaving his files and other data with the university. But state’s Sandusky investigation continued, and on January 5, 2011, he met with Cynthia Baldwin about being subpoenaed by the grand jury. During that meeting, Schultz told Baldwin that a Sandusky file might still be in the vice president’s office, but Baldwin told him not to look for it or retrieve it, according to an affidavit filed with the court in November last year.

Like other administrators, Schultz testified before the grand jury later that month. When asked if he was “in possession of any notes regarding the 2002 incident,” Schultz said he was not.

I have none of those in my possession. I believe that there were probably notes taken at the time. Given my retirement in 2009, if I even had them at that time, something that old would have probably been destroyed. I had quite a number of files that I considered confidential matters that go back years that didn’t any longer seem pertinent. I wouldn’t be surprised. In fact, I would guess if there were any notes, they were destroyed on or before 2009.

As Schultz told prosecutors that he might have taken notes which were probably long gone, a file filled with Sandusky notes was sitting in the bottom of a locked drawer in the vice president’s office. Only two people knew about it – a secretary who retired in 2007, and Schultz himself. Neither were employed by Penn State at the time.

Schultz was called back to the vice president’s position temporarily in October 2011 when Al Horvath left for a job at the Smithsonian and a search for a permanent replacement began. He and Tim Curley were charged on Nov. 5, 2011. Graham Spanier and Joe Paterno were fired shortly thereafter. Penn State fell into complete disarray.

In that tumultuous week, Schultz phoned his secretary, Kim Belcher, and asked her to bring him his “transitory file,” which contained documents relevant to his transition back into the position. “When I went in to pick that file up, it occurred to me that if there was a file on Sandusky, it would be in that bottom drawer,” Belcher said this week.

What happened next has been well reported. Belcher made a copy of the Sandusky file, but wound up giving Schultz the original documents instead of the the copy. She held on to her copy until her own grand jury appearance in April 2012, never mentioning it to Freeh’s investigators during two separate interviews. Schultz’s attorney kept the originals confidential until about the same time too.

It doesn’t seem possible that Belcher could have managed to mishandle crucial evidence so severely. If you believe her story, it was all a mistake, compounded by the panic of having given away evidence to a defendant. “I didn’t make the right choices,” she said.

But prosecutors had a different theory. The morning of her grand jury appearance, Belcher met with prosecutor Frank Fina. Here’s what Belcher said about that conversation this week:

Attorney: And Mr. Fina insisted that you were not telling the truth, right?

Belcher: He did not believe I was telling the truth, that’s correct.

Attorney: He tried to get you to say that Gary Schultz took the files, didn’t he?

Belcher: It was my understanding that he was looking for me to say that.

Attorney: Mr. Fina was looking for you to say that Gary Schultz told you to take the file, right?

Belcher’s testimony completely contradicts the conventional narrative that Schultz lied about knowledge of his notes, then coerced her into concealing their existence from both prosecutors and Freeh investigators. With context, his testimony before the grand jury seems accurate: he might have taken notes years earlier, and they might still be in his old office, but as a retiree, he had no way of confirming their existence, and thought they had been tossed when he left office in 2009.

Freeh’s team got hold of the notes in May 2012, a month after they were turned over to prosecutors. He claims they were “independently” discovered. Instead, in the wake of Belcher’s testimony, it’s more reasonable to conclude that Fina, who by May 2012 had developed a cozy relationship with Freeh investigator Greg Paw, provided Freeh’s team with a copy of the notes for his report.

By now it’s clear that Freeh’s report simply reflected the views of state prosecutors that were spoon fed to his team for months. There was absolutely nothing independent about his inquiry.

But what could turn out to be revolutionary is that Gary Schultz just might be telling the truth after all. Of the three administrators charged, Schultz’s grand jury testimony seemed the most dishonest. If he told the truth, what else did Freeh and prosecutors get wrong?