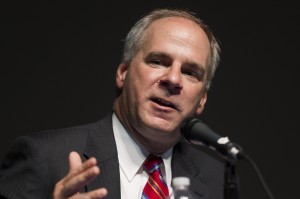 Secretary of Education Ron Tomalis has one thing to say about whether he has a copy of Penn State’s contract with Louis Freeh:

“I don’t know what you’re talking about.”

That was essentially his department’s response to my latest request for a copy of the contract – the third time my request was deemed so unclear that  nobody at the Department of Education could understand which records I was asking for.

More than a month ago, I asked the department for “copies of contracts, memorandums of understanding, letters of intent and any other agreements, regardless of title, to which the law firm of Freeh, Sporkin & Sullivan, LLP, is a party.”

I even told them the best place to look for the records – the Secretary of Education’s Office.

But it still wasn’t clear enough for Tomalis’ crack staff to mount a hunt for the elusive contract that both Penn State trustees and public officials have so far refused to divulge.

Tomalis was second in command of the trustees’ so-called “committee” that oversaw Freeh’s investigation. He, along with Ken Frazier, directly communicated with Louis Freeh and his general counsel.

For them to start a search, I would have had to ask for one of several types of records that was mentioned in an obscure Office of Open Records’ opinion in 2009, Michael Bressi, the department’s Open Records Officer informed me. So let’s look at that decision:

The OOR analyzes right-to-know requests to determine whether or not … an agency can “identify the type of information being sought.” The decisions have considered factors such as time frame, type of record sought and subject matter. If the request contains sufficient descriptive information in any or all of those categories to enable an agency to discern what information is sought and locate responsive records, it will be ordered to produce them.

My request specified the type of record (contract, memorandum of understanding, etc.) that I was asking for, as well as a party that signed the document. It’s certainly consistent with this decision.

But let’s be honest: these people don’t care about the law. Even a neanderthal knows what I was asking for, and arguing the merits of any records denial is an exercise in futility.

No matter how unethical and illegal the department’s response might be, it’s a smart move on their part because it allows Tomalis to dodge a perjury charge. He previously said he didn’t have the contract, and denying access to the record would prove its existence, thereby making him culpable. Using the “not sufficiently specific” response is one of his only ways out. Bravo.

I immediately appealed the department’s decision to the Office of Open Records. But that place is still part of the Corbett-controlled executive branch, and I have no confidence in its ability to render judgements in accordance with either court rulings or its own opinions. We’ll know in 30 days whether that place has any integrity or not.

But it’s clear Tomalis and his staffers will never willingly release the contract. And why should they? The Right-to-Know Law lacks any incentive for state officials to comply with its demands. There are no criminal penalties for violating the RTKL. They can face civil penalties of up to $1,500, but that’s supposed to be paid for by the state agency, and only after somebody sues and wins, which nobody really does.

The only way to win this game is to put some of their own skin in the game. That’s why I’ll be hiring an attorney to start a civil suit against Bressi, Tomalis, and their attorney for denying access in bad faith. The $1,500 penalty itself isn’t a real deterrent. But making Tomalis and his top deputies give deposition after deposition at some point will add up, and hopefully send a message that they’re not above the law.

I’ll also be pursuing a private criminal complaint against Tomalis for claiming that the contract didn’t exist. But I might wait until the new Attorney General is sworn in.

Until then, I’ll continue filing requests for information, hoping at some point they realize it’s easier to just be transparent instead of keeping secrets.