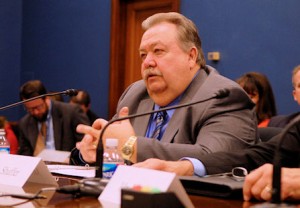 Ever hear of a guy named Carl Schaffer? Neither have I. Until yesterday, that is, when the Centre Daily Times said the trustee “scoffed” at recommendations to raise transparency and accountability at Penn State.

In response to a plan for reform released by state Auditor General Jack Wagner on Wednesday, Shaffer, who’s also the president of the Pennsylvania Farm Bureau, had this to say, according to the CDT:

Shaffer said Penn State’s size and location are what make it different: “A lot of things might not fit for us,” he said.

So Shaffer thinks that Penn State is too big to be burdened by people to want to know more about what the university is up to. Its central-Pennsylvania location makes it impossible to implement rules that prevent trustees like David Joyner from being awarded lucrative jobs. And there’s just no way the university can continue to exist without allowing trustees to conceal their personal business dealings with the university.

Hogwash doesn’t even begin to describe the idiocy that spewed from Shaffer’s mouth on Thursday.

Maybe we should give him a break. After all, Wagner wants two agriculture trustees to take a hike. Shaffer’s cushy trustee job is in jeopardy.

But not in serious jeopardy. If the board had any intention of making any meaningful reform, it would have done something – anything – to address the core problems in the last year.

Board President Karen Peetz had this to say about Wagner’s recommendations, according to the CDT:

“Everybody wants to tell us what to do,” she said.

Peetz wants to have a consultant review all of the recommendations, find similarities and what it would consider best practices and then turn them over to the Association of Governing Bodies to get its experts’ take.

Yes, Karen, everybody is telling you what to do, because you haven’t done squat to fix the culture of corruption from which you reap the benefits – but only on the backs of students and alumni.

Wagner’s plan is simply common sense, something you and your lackeys clearly know nothing about.